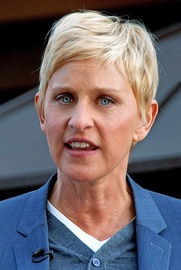 Ellen Lee DeGeneres is an American comedian, television host, actress, writer, and producer. She starred in the sitcom Ellen from 1994 to 1998 and has hosted her syndicated television... Wikipedia